I noticed I had a lot of extra little scraps of styrofoam sheets with bumps and missing sections. So I put them all together into a little tower like building, that would make a great little outpost or lookout for a Forward Obseration Officer. 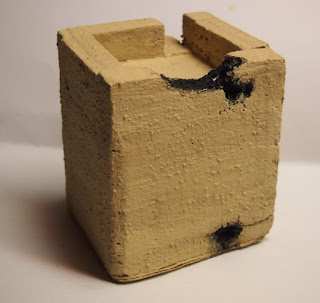 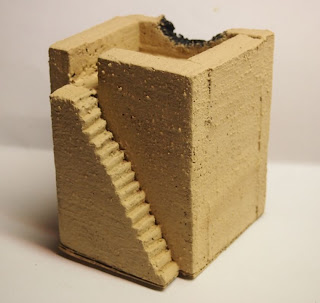 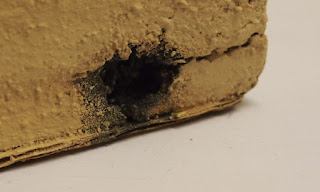 Here's a little update of what I added to the other Egyptian house in ten minutes. Not much, but it's something. 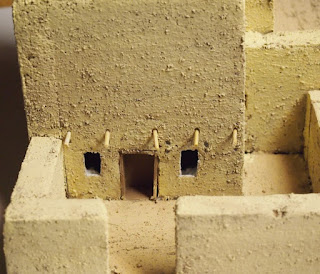 More to come,
Thanks for visiting!
FF
Posted by FriendlyFire at 19:58 No comments:

After viewing a fellow blogger's blog, I came across a very interesting and helpful tutorial. I am sure you've all already heard of Thanos at  http://miniaturesterrainpage.blogspot.ca/2010/11/normandy-house-building-tutorial-1.html (I hope you don't mind, Thanos) and I thought that the building featured in his tutorial would look very natural on a Normandy table, and possibly even a Market Garden game. (It seems to be a very popular page on his blog!)


I made it more as an experiment, as I've found out that the best way to learn in the terrain building "business" is to proceed and learn from your errors. It turned out acceptable, but as I'e said, I learned a lot over the period of time I spent making it, knowledge I will use to speed up the building process of future "European" houses.

As you can see, the front door isn't made yet. 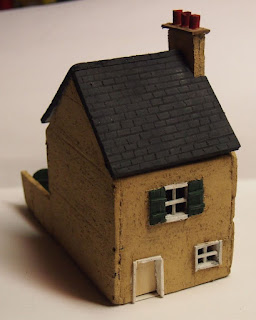 The windows and doors are Popsicle stick pieces cut down and split. 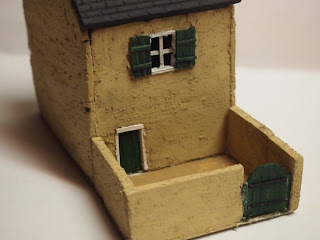 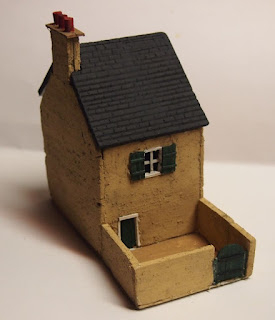 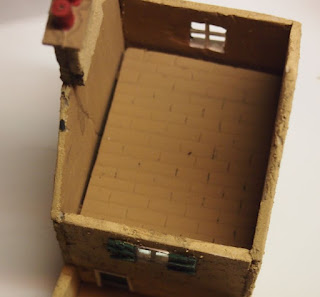 The ground is not yet painted/made, same with the yard. 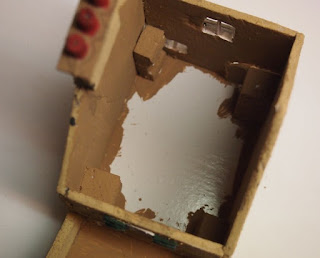 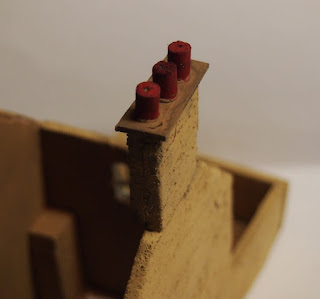 Thanks again Thanos
C&C are Welcome

Just because I haven't posted anything new during the past few days, doesn't mean I haven't been doing anything. I've finished (almost) the M10's, I've built and painted another Egyptian building, a Normandy style building, and have painted countless Germans infantry (which I am still trying to photograph, without any success).

I chose the M10's because they were the only "Tank-Killing-Tank" the US had during the North Arfrican campaign and were very common during the Sicilian/Italian Campaign. They also posed a nice little challenge, trying to make it look like there is no floor at the bottom of the turret, while still having a fully traversing turret .

I stole the sandbags from many reference photos and other gamers models. I remember watching a program where they had a veteran who drove an m10, and he explained how they had sandbags to give them a little extra bit of protection. This first M10 as seen here is more organised looking then the second, and has 1x 50.cal in back. Drivers are from the Hat "US Tanki Riders" set. the one with the greener shirt actually had nothing under his torso, so I added some clay to ressemble a body, and painted it to blend in with the rest of the figure. 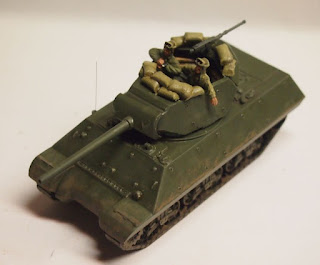 They are both sprayed with Tamiya USAF Drab. The shells in the turret are simply tooth pick bits filled down. The sandbags are clay. 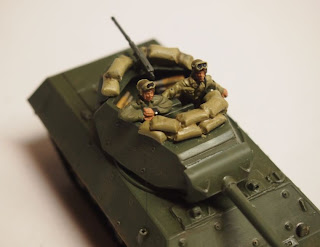 Same weathering procedure as the M4A2's. 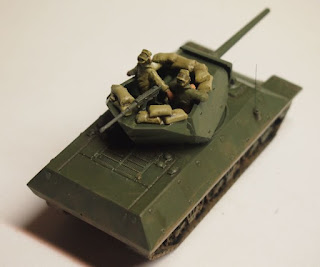 Here is the second one, looking much more messy and untidy, wich was common sight on a battlefield. 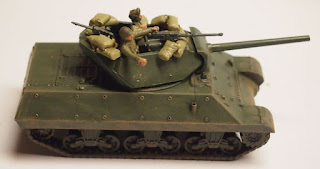 The left figure is the mortar figure from the second Italeri US infantry set. 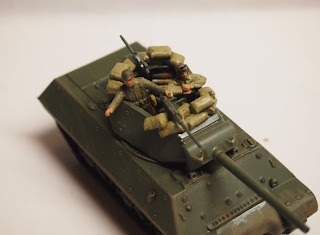 The system I used for the seemingly bottomless turret is to have one strip of plasticard (or if your smart enough, just leave some of the original floor and cut around it like so). 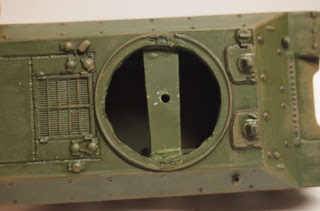 I then gave it a swivel hinge by making a second plastic strip on the turret, and glued a piece of a toothpick. 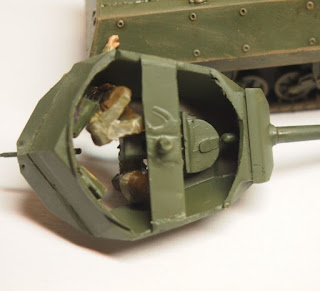 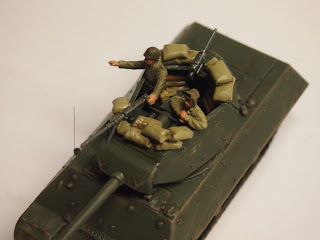 Hope you like them. I will add some shell boxes whenever I get my Ground Vehicles set from Academy models, and will add more stowage and decals. Any suggestions? I am sorry that I am not too great in explaining, and add to much useless details. If there are any questions I`d love to answer them.

Thanks for reading,
and more to come!

Here is a post from a couple months ago. I will be posting it in a couple posts, so it will give the feel of a WIP (Even though it's been months). Let's just pretend this is new! (It looks horrible at this stage, and the stage it is at now  is much more pleasing to the eye in my opinion).


The model was made to be a wargame model that would still look nice on a shelf for display.


The main hull and the tower part are made of foam parts that came with a workout bench, I also used popsicle sticks for doors and panels, and I used syro foam cups for the little gunner posts.

I have hollowed out the top of the steering post (sorry, I do not know the correct terms ). I have reinforced it with wood, made to look like metal.

For the Oerlikon, I just modified my Polsten gun from my Airfix Buffallo, as the Polsten was a low cost version of the Oerlikon and looked quite similar. (Now I just need another three ) It still needs some work though... The shields are made of credit card plastic, the shoulder things are staples from a crate, the  is made of multiple little caps I found in the garage, but from wich products I can't remember.

I have just realised how stupid and oversized those toothpicks look, and will replace themwith popsicle sticks. I also need to add more wood to the frame of the little tower parts interior, as it is too deep.


More to come,
Thanks for reading!
Posted by FriendlyFire at 12:09 No comments:

Here's a little tutorial from early May that I had posted to the Airfix Tribute Forum. I thought it would be a nice little treat for those who have been dropping by for the last couple of weeks. Yes, I have really not posted much, but I have been quite productive. I am just not good at taking photos at all. Between modelling, video games, drumming, reading and working out, my free time is very stuffed. Thanks for listening and not giving up on this blog. I hope that this tutorial will come to help those interested. (And I am sorry for not having any photos of the building without paint)

Sorry but for some reason this post is coming out crooked?

I finally got myself a new camera (one that isn't just 100$, and more on the line of 600$), but remember that it is not the camera that takes good photos, but the photographer (and I have a lot to learn on photography!). Soon though I should understand it. Last Saturday I started working on this Egyptian house for a terrain piece. I started with a cardboard base, and used styrofoam that came with an exercise bench (Normal insulation foam would work too). I built the thunder bolt shape of the building, keeping all walls the same height, and later cut one part shorter as I felt it gave it more depth (the part that was cut off is now the wall/gate in the front of it) . Glued it together (quickly) with a hot glue gun, and added cardboard floors/roof. I painted it with a mixture of light brown acrylic and sand to give it texture and a base colour:

I then gave it a dry brush of sand/light brown.

A little comparison with a Sherman (without the final drybrush on the house, what can I say, I was bored watching it dry!)

I then did a final dry brush of Sand, and voila! There are still many little details I will add, such as windows and sun shelter's (if that's what they call them) .

It took me one night to mesure and construct the main building, and one or so nights to paint/highlight it.It was virtually free for me (Dollar store paints, free styrofoam,cardboard and sand) but what spent on labour I saved in cash (that square with a hole in it that Italeri calls an Egyptian house goes for over 50$!). And let's not forget that this is what some may consider a "Big House", especially for a country such as Egypt in the 40's.

Sorry for not posting in a while, been quite busy with Canada day and all!

Here are some of Hat's PAK 40 that I've been working on. I finished the guns but still have to finish the two camouflaged crews I have begun.

I love the "web-scheme" look on these guns, but it is very time consuming.

Here's a little support for my Fallschirjaeger. The crew are from Italeri's excellent new set "German Paratroopers (Tropical Uniform)". They are painted up in tropical uniform (Crete, Tunisia, Sicily, Monte Cassino, etc.) I think Italeri's plan with their new WW2 sets is to complement other sets on the market, by giving support crew and weapons rather than regular infantry.

"Normandy-Style" (well, that's what I like to think of it as). The crew is still being painted.


You might have guessed why there are only three photos of four guns, and the reason why it is so is that the last one was a Frika Korps one, to accompany my Airfix desert PAK 40, but is exactly the FJ one just with the HAT crew painted in DAK colours, nothing special. (I could have sworn that I did take a photo though.)

With such a cheap price, why not add one to your next order?
Posted by FriendlyFire at 19:54 6 comments: